This method is based on a knowledge achieved in the 1930s by Kautsky and Hirsch (1934), that photosynthetic organisms containing chlorophyll a emit out some portion of captured light energy in a form of fluorescent radiation in visible part of the spectrum (especially its red to near infra-red area around 685 nm and 735 nm). Later this phenomenon was explained as a part of mechanisms for dissipation of excessive energy derived from captured photons. 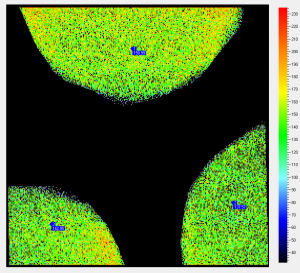 Chlorophyll fluorescence represents solely a physical event, but changes in the intensity of fluorescence emission reflect the course of photochemical reactions in primary (so called “light”) phase of photosynthesis: photon capture, excitation of chlorophyll a molecules by their energy and a release of energy-rich electrons, from which the energy is transferred into chemical bonds of ATP and NADPH2 for later utilization.

The fluorescence emission is induced by short weak pulses of measuring light and is recorded by a sensitive detector. The detector is equipped by long pass wavelength filter and therefore only induced blinks of fluorescence radiation can pass through. Due to a dynamics of changes in fluorescence intensity, recorded in some time scale, it is possible to describe changes on biochemical level in photosynthetic apparatus of plant, algae or cyanobacteria, and to consider roughly the efficiency of photosynthesis in studied organism. Photosynthetic apparatus of photo-autotrophic organisms is highly sensitive to environmental changes caused by both physical (e.g. temperature, excessive irradiation, UV-light, drought etc.) and chemical factors (the presence of toxic organic compounds both natural and artificial like herbicides, the effect of heavy metals, ozone and another compounds, including the deficiency of nutrients).

Advantage of this method is, that the measurement could be done quickly, non-destructively and repeatedly both in field and in the lab. It is successfully used in plant stress physiology in studies on the effects of above mentioned factors. One disadvantage is, that various kinds of stress can evoke similar non-specific response and thus the possibility to use fluorescence as a direct proof of an effect of specific factor is limited, especially when simultaneous effect of several factors is possible.

These so-called “fluorometers” (all from Photon Systems Instruments, Brno, Czech Republic) are designed for measurements of induced chlorophyll fluorescence in relation to physiological state of phytoplankton, especially its photosynthetic activity. In comparison with fluorescence probes these fluorometers use typically just 2 types of excitation LED diodes, blue (455 nm) or orange/red (from 590 to 620 nm) according the instrument settings and they record a chlorophyll fluorescence signal at 680 or 690 nm. All these fluorometers work in PAM regime (Pulse-Amplitude-Modulation) (for definition see e.g. Roháček and Barták 1999), i.e. except the measuring excitation light another light sources are used – middle intensity actinic light (usually blue or red, wavelength up to 620 nm) and strong saturation light (blue, red or white, wavelength up to 620 nm).

During the measurement, the sample is irradiated by very short and weak pulses of measuring light, which induces short flashes of fluorescence (= Pulse modulation, the length of flashes is about units of microseconds). According to the measuring protocol, the sample is additionally irradiated by actinic or saturation light, which induces a change (usually increase) of fluorescence signal intensity (= Amplitude modulation). A record of such changes in a time course is called fluorescence induction kinetics, which has a typical shape in vital samples and is used for calculation of fluorescence parameters like basal fluorescence level (F0 – related to chlorophyll-a content or number of active photosystems with attached light-harvesting complexes), maximal fluorescence (FM – related especially to the number of active photosystems) and many other parameters, which are known for specific relation to some processes of photosynthesis, especially its primary phase (“light” phase, when light photons are caught and their energy is stored into temporary reserve in ATP and NADPH). Very often cited fluorescence parameter is a ratio of variable fluorescence (difference FM-F0) to maximal fluorescence, FV/FM. Its value can reach 0.0 to 0.823 and describes a maximal capability of photosystems II (PSII) of algae and cyanobacteria in the sample for catching the light energy (so called maximal quantum yield of PSII). Fluorometers AquaPen (simplified field instrument) and FL3500 FAST (extremely sensitive lab instrument) are suitable for measurements on algae and cyanobacteria suspensions. Fluorometer FluorCam is a “fluorescence imaging system” equipped with a CCD camera, which enables to record fluorescence changes on a plane area, is designed for fluorescence measurements of leaves of higher plants, but can be used even for simultaneous measurement of higher number of samples e.g. algae suspensions placed in a microplate.

In a cooperation with Photon Systems Instruments (Brno, Czech Republic), our department took part in the development of Algae Online Monitor (AOM). It is a simplified PAM fluorometer with through-flow measuring chamber and uses two LED diodes (blue 455 nm and orange/red 590 nm) alternately for fluorescence excitation. Due to this it is able to distinguish two basic groups of phytoplankton – cyanobacteria and green algae. The instrument has been adjusted for continuous in situ measurement. The amount of phytoplankton correlates with fluorescence signal, and is calculated as the area under the kinetics curve. Its limit of detection is about 300 to 400 cells of Microcystis aeruginosa per mL of measured sample, corresponding to the chlorophyll-a concentration of 0.02 µg L-1 approximately. AOM was tested in natural conditions during the season 2009-2010 and nowadays it is available as a commercial product of PSI company. This instrument is suitable for installation into e.g. drinking water plants for monitoring the occurrence and composition of phytoplankton in incoming water and enables to make decision about the need of change in water cleaning technology settings. 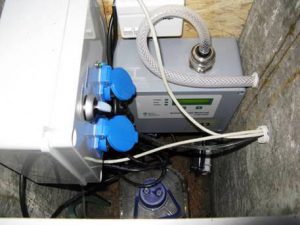 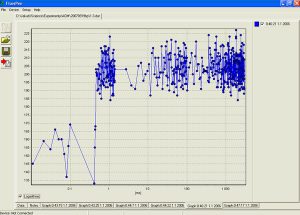