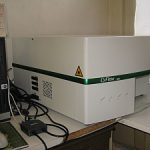 Flow cytometry enables a differentiation of cell populations and determination of exact counts of cells suspended in the sample based on their optical characteristics. In spite of the fact that the method was primarily developed for mammalian cells, it may be also successfully used for phytoplankton analysis of samples originating from aquatic environment. Each particle is characterised by light scatter (both forward and side scatter) and fluorescence. The main advantage of phytoplankton cells is a presence of fluorescent pigments (chlorophyll of green algae, phycoerythrine or phycocyanin of cyanobacteria). On the other hand, heterotrophic cells or acellular structures (bacteria, viruses) have no fluorescent pigments but may be signed by various fluorescent substrates, which are bound 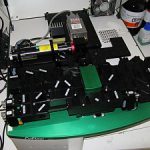 to DNA in most cases.

Flow cytometry at our department for 4 optical parameters (FSC488nm, SSC488 nm, FL1 and FL2). Five optical filters have been recently available, (527/30 nm for the detection of SYBR Green I, fluorescein or ELF fluorescence; 590/50 nm – phycoerythrine; 675/20 nm – chlorophyll; 630 LP filter and 450/50 nm for the detection of DAPI or Hoechst fluorescence), however optical system is modular and may be supplied up to 16 optical parameters. The great benefit of Partec CyFlow cytometers in comparison with instruments of other companies (BD Biosciences, Beckman Coulter) is a possibility of the measurement in so-called “true volumetric counting” regime, which enables determination of cell concentrations in the suspension without count-check beads or other reference particles.

CyFlow ML flow cytometer has been used mainly for the detection of phytoplankton in field samples and for toxicity testing using laboratory algal/cyanobacterial cultures. In addition to determination of abundances of phytoplankton groups, phytoplankton esterase metabolic activity has been also measured using fluorescein diacetate as a substrate. Total bacterial counts (using SYBR Green I) as well as bacterial viability (Nucleus Acid Double Staining protocol using SYBR Green I and propidium iodide) and cyanobacterial viability (SYTOX Green) in freshwater samples have been also investigated. In the future we would like to improve methodologies for the extraction of bacteria and cyanobacteria from sediments, measure respirative activity of bacteria using CTC and investigate extracellular phosphatase activity using ELF-97.

Last but not least, at the CCT flow cytometry has been recently used for the evaluation of cyanotoxin effects on HaCat keratinocytes. Cell cycle analysis of HaCat cells fixed by ethanol after propidium iodide staining has been performed by flow cytometry and the percentage of cells in individual phases of cell cycle has been detected using special cytometric software (Fig. 5).

Fig. 3) An analysis of membrane integrity of E. coli exposed to phthalocyanine using Nucleus Acid Double Staining  (NADS ) protocol. Bacteria with intact membrane were gated in “live” region, whereas bacteria having damaged membrane  were localized in “dead” region. Phthalocyanine exposure of bacteria under light (Fig. D) led to significant increase of membrane-compromised cells compared to non-exposed controls (both dark – A and light – B) as well as to phthalocyanine treated bacteria exposed in the dark (Fig. C).

Fig. 4) The investigation of viability (membrane integrity) of cyanobacterium Microcystis aeruginosa exposed to hydrogen peroxide using fluorescent stain SYTOX Green. Cells having intact cell membrane which can be considered as viable have been gated into SYTOX- region, non-viable cells having damaged cell membrane (possessing high green fluorescence) have been gated into SYTOX+ region. While after 7 hours of the exposure almost all cells were viable (picture on the left side), percentage of non-viable cells after 24 hours (picture in the middle) and after 72 hours (picture on the right) significantly increased.

Fig. 5) Cell cycle analysis of HaCat keratinocytes for the studies of cyanotoxin effects. Picture on the left side represents the histogram of control HaCat cells stained by propidiumiodide (PI), whereas the same histogram processed by cytometric software is depicted on right. While red fluorescence of G1 HaCat cells peaked approximately at 200 (blue peak), G2/M cells with duplicated DNA content form the peak (green colour) around 400. Additionally, cells just synthesizing DNA (S-phase of cell cycle) are situated in red area of the histogram between G1 and G2/M cells.