A range of equipment is available at CCT for analyses of cyanobacterial toxins. Microcystins are the most extensively studied cyanobacterial metabolites, and their levels are regulated in drinking waters according to recommendations of WHO (1 µg/L, Czech national decree No. 252/2004 Sb.). In CCT, microcystins are analyzed by HPLC a ELISA. Recently, methods based on mass spectrometry are developed also for other types of toxins such as cylindrospermopsin.

Microcystins are analyzed by validated methods in following matrices:

High-performance liquid chromatography (HPLC Agilent 1100 and Agilent 1260 Infinity with UV-VIS PDA detector and newly Agilent 1260 Infinity+Agilent Triple Quad 6460 LC-MS/MS) is routinely used for microcystin analyses. Methods have been validated in 2000 within the international interlaboratory comparisons. In 2008, Czech national ring-test for microcystin analyses has been organized in cooperation with National Institute of Public Health.

ELISA techniques are also used for analyses of cyanobacterial toxins. We have tested commercial kits (e.g. from Envirologix (Portland, USA) but with regard to large numbers of analyses, we have developed in-house techniques based on two different antibodies (anti-Microcystin-LR MAb – MC10E7, and anti-Adda MAb – AD4G2). Carcinogenic alkaloid cylindrospermopsin is analysed by screening ELISA kit from Biosense, (Bergen, Norway). 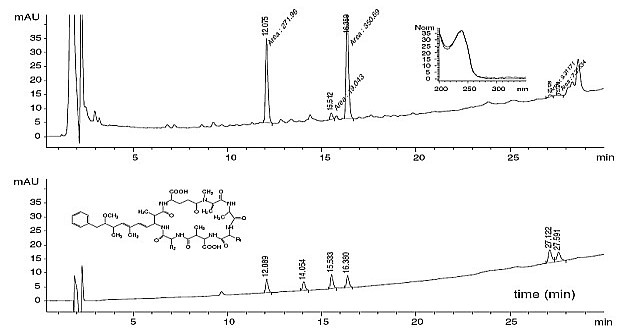