1/ A strikingly high species diversity on the Roof of the World: the genus Taraxacum in Ladakh

A detailed exploration of Ladakh, a mountain region situated in a rain shadow of the Great Himalaya Range, revealed a twice higher plant species diversity than previously known. The monograph of the model genus Taraxacum encompasses 120 species, of which 50 were discovered as new. This study revealed that the West Himalaya represents one of the world centres of the Taraxacum diversity, with a number of endemic and morphologically and evolutionarily isolated species. 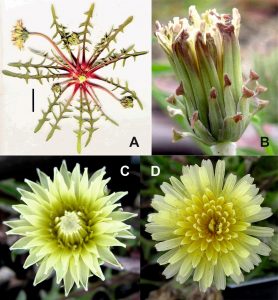 Taraxacum dilutissimum Kirschner & Štěpánek, one of the most widespread species in Ladakh, which was, however, scientifically unknown until recently.

Plants are propagated by seeds, however, many plants also propagate clonally using stolons, rhizomes or roots. Although clonality is common in plants, it has been paid little research attention; we do not know how it changed during evolution or what functions it can provide. Phylogenetic analysis of ca 3000 species of European flora showed great evolutionary flexibility of clonality. Plants can thus flexibly attain its functions when the environment requires it, and get rid of it just as easily. 3/ Alpine plant growth and reproduction dynamics in a warmer world

Climate warming affects the growth and survival of mountain plants. In the Tatras, Rumex alpinus produces rhizomes three times longer and twice as many leaves as 40 years ago. High summer temperature, however, leads to a lack of water in dense vegetation and stronger competition. Our results from the Himalayas suggest that warming‐induced responses in alpine plants will be multidimensional and spatiotemporally variable and will hinge on the physiological tolerance of species to climate change. Using a global seed bank database (GloSSBank) comprising data for 2,350 angiosperms, we examined whether soil seed bank type (transient vs. persistent) and density are determined by phylogenetic relatedness. We found significant phylogenetic signal in seed bank type and density, providing evidence that the ability to form persistent seed banks is not randomly distributed across the phylogeny. The ability to persist in the soil was phylogenetically correlated with the production of dormant and smaller seeds, but seed mass and seed dormancy per se were poor predictors of seed persistence. Interestingly, habitat-related variables (mainly disturbance and canopy openness) but not climate significantly affect the ability of seed plants to form persistent seed banks. Our study is the first to show that phylogenetic relatedness plays an important role in explaining seed bank properties in angiosperms and how these properties relate to early life-history traits, climate and habitat-related variables. These findings represent important insights into plant behaviour in unpredictable environments and how seed plants might respond to global environmental changes.

Establishment of alien trees outside their native range can be constrained by the absence of suitable fungal partners. Our metastudy shows that alien conifers rely upon association with co-introduced fungi from their native range, while alien eucalypts often form novel associations with fungi native to the region of introduction. Successful establishment of distinct groups of exotic trees can vary depending on their ability to associate with local fungi.

6/ Can relict-rich communities be of an anthropogenic origin? Palaeoecological insight into conservation strategy for endangered Carpathian travertine fens

Western-Carpathian travertine fens harbour many rare species considered glacial relicts. Using a multi-proxy approach applied on two peat cores, we tested the assumption of naturalness and Holocene continuity of the current travertine communities. We have found that even if the locality itself is old, the current communities were established once the woody plants and reed were reduced by medieval land use. Our results strongly support the need for active conservation actions as mowing and extensive grazing which has conditioned the recent travertine assemblages in the past.

The cooling leaf canopy protects forest organisms from extreme temperatures and has a significant influence on their adaptation to global warming. In an international research team, we studied an effect of climate warming under the forest canopy, thus also showing how warming in the forest differs from warming in open spaces. We measured the temperature in the forest interior at 100 sites and combined these measurements in a computer model with up to 80 years of data on the density of the forest canopy. This latter series comprised data taken from almost 3,000 repeated vegetation plots in European forests. If the tree canopy is denser, it buffers climate warming for the organisms living beneath it. If it becomes sparser, the plants living beneath it experience additional warming. Their previously cool, shady and generally more humid habitat is suddenly exposed to warmer and also drier conditions. Many species cannot adapt quickly enough, are displaced by warm-affinity species and may die out locally. Forest managers should therefore take account of the effects of forestry work on the climatic conditions in the forest interior and its potential impact on biodiversity.

Plants are easier to study that animals as they do not move, but a (larger) half of their bodies is inaccessible being hidden in the soil and bearing no clear clues for identification. Specifically, assignment of roots into species in the field, a necessary condition for understanding how species interact, has long been an enigma. Still, these roots search for nutrients in the soil and respond to their concentrations, something that has been known only in culture conditions, but the true role of it in the field has been essentially unknown.  We bypassed this obstacle by using quantitative Real-time PCR and identified them into species, and determined their amounts. This permitted us to show a snapshot of root interactions in the field. Using it we showed that root interactions and physical aggregations change strongly with nutrient availability and overall root density: roots of all species are finely intertwined in the shallow soil which is nutrient-rich in, but behave much more individualistically in deeper layers poor in nutrients.

From deep ocean trenches and the geographical poles to outer space, organisms can be found living in remarkably extreme conditions. This book provides a captivating account of these systems and their extraordinary inhabitants, extremophiles.

10/ Relationship between stability and diversity of plant communities

Understanding how diversity affects ecosystem stability is crucial for predicting the consequences of continued habitat and biodiversity loss on ecosystem functions and services. Long-term productivity stability in plant communities is often associated with greater species, phylogenetic or functional diversity, more complex size and age structures, or higher asynchrony in species fluctuations (compensatory dynamics), all potentially increasing community resistance to perturbations. However, the relative importance of these stabilizing pathways is still poorly understood. We collected long-term time series of vegetation data across the world, stemming from a variety of biomes and habitats. Results showed that stability, measured as temporal stability of total community abundance, was more strongly associated with the degree of synchrony than with species richness (Valencia et al., 2020a, Valencia et al. 2020b, Dolezal et al. 2020). These results highlight the prevalence of biotic drivers on ecosystem stability, with the potential for additional environmental drivers to alter the intricate relationships among richness, synchrony, and stability. To consider these different drivers of stability in concert is critical for defining the potential of communities to remain stable in a global change context.