1/ Holocene history of the landscape at the biogeographical and cultural crossroads between Central and Eastern Europe (Western Podillia, Ukraine)

Our results indicate for the first time that the extraordinary species richness of steppe grasslands in Western Podillia was shaped by the unusual combination of relatively humid climate and continuity of open or semi-open landscapes since the Last Glacial. Such continuity was proved by a multi-proxy study of two profiles sampled in calcareous fens adjacent to steppe grasslands. The complete absence of wood remains in Holocene sediments and the persistence of fen specialists showed the exceptional long-term stability of open wetlands. The continuous presence of pollen of light-demanding plants, low abundance of closed-canopy trees compared to open-canopy trees, and stable concentrations of geochemical indicators of erosion suggest a semi-open landscape with a mosaic of forests, steppe grasslands, and other open habitats. Multivariate analysis revealed the similarity of pollen assemblages with sites in the forest-steppe zone at the interface between the Pannonian Basin and the Western Carpathians. The continuous presence of non-woody microcharcoal in high abundance suggests a role of fire in maintaining open habitats, and the archaeological record provides evidence of human activity throughout the Holocene near the study sites.

Synthetic pollen diagram for Western Podillia for the entire Holocene period. The representation of open-canopy tree pollen is substantially higher than that of closed-canopy tree pollen during the Holocene. The continual occurrence of pollen of the heliophilous herbs and Poaceae is also shown.

2/ Holocene history of Larix in the Jeseníky Mts, Czech Republic

Based on historical data larch is considered to be a native species of the Czech flora, however its Holocene history is still unknown. In this paper we present the Holocene pollen record of larch at four localities in the Jeseníky Mts and a review of historical data in the wider area. The occurrence of larch in the Jeseníky Mts is recorded throughout the Holocene, except for a critical period of 7000-2700 years before present. At this “mid/late Holocene bottleneck”, the larch retreated from most of its range to the core area, which, according to our historical data, was probably located in the Bruntál region. Available pollen data from 51 sites in the Czech and Slovak Republics show that larch behaved similarly in other regions – in the critical period, it disappeared from many regions except the core area of the central Western Carpathians. Later, since the Iron Age, it began to spread again. The area of larch thus changed dynamically during the Holocene. Historical data from the 18th century show an expansive phase in the development of the larch population. 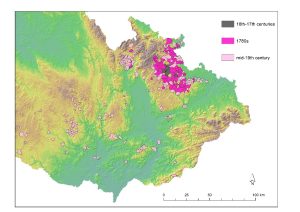 Pollen and historical records tell a story of how Larix survived during the Holocene in the Jeseníky Mts.

Fossil pollen spectra from 112 mainly mountainous sites in Central Europe, ranging from the Late Glacial to the present showed long-term changes in the main gradients of vegetation composition. The main source of variability was the proportion of deciduous temperate trees, while the second one was an altitudinal gradient that coincided with air temperature. The fine-grained pattern in the present mountain landscape was formed as late as during early modern colonization. These results highlight the relevance of integrating past landscape trajectories into modern biogeographical models.

In this study, we reconstructed a long-term fire history of two regions located in the Central European temperate zone that differ in the timing of the Middle Holocene expansion of broadleaf-dominated forest communities. We tested a hypothesis that biotic changes influenced past fire activity independently to climate change. Multiple-site charcoal accumulation records were used to estimate regional-scale trends in biomass burning and to compare them with major trajectories of vegetation development. Extensive 14C-dated soil charcoal records collected within both regions served as a marker of a stand-scale fire occurrence. Our results suggest that increased fire activity during the Early Holocene period was driven by both a drier- and warmer-than-present climate and easily flammable fuels produced by conifer-dominated vegetation. We identified an inhibiting effect of the concomitant Fagus sylvatica expansion on levels of biomass burning. The presence of charcoal layers (dark bands) indicating local occurrence of fire in the past. Photo by H. Svitavská Svobodová

The proportion of taxa in a pollen spectrum may not correspond to their proportion in vegetation. Quantitative reconstruction models therefore consider pollen productivities or fall speeds. We argue that azonal presence of spruce, an otherwise zonal tree species, in wetlands may confound the pollen-inferred reconstructions of vegetation cover as well. Based on a large database of vegetation plots from the Western Carpathians, we demonstrate that spruce is the tree species which most frequently colonized peatlands, more so than alder, whose effect on local pollen spectra has been frequently admitted. Using 73 sequences we further demonstrated significantly greater pollen percentages of spruce (ca 20-25%) when the sediments contain spruce macrofossils. Finally, we compared the proportions of spruce and beech in modern surface pollen spectra with their real proportions in the surrounding landscape where beech acts as zonal tree. We found that even a small patch of spruce alters the proportion of spruce to beech. All these results suggest, contrary to the premises of current models of pollen-based quantitative reconstructions in Central Europe, that fossil spruce pollen counts from wetlands may strongly be overestimated where it occurred in close vicinity of a wetland.

6/ Can relict-rich communities be of an anthropogenic origin? Palaeoecological insight into conservation strategy for endangered Carpathian travertine fens

The Western-Carpathian travertine fens supplied by groundwater with deep-circulation represent a unique ecosystem confined to the small area in the intermountain basins. Using multi-proxy palaeoecological approach we tested the hypothesis that these fens hosting relict species nowadays are ancient and of continual whole-Holocene occurrence. Our results based on plant macrofossil, mollusc shells and pollen grain analyses of two profiles from the locality Močiar (Nature reserve) near Stankovany village have shown important anthropogenic influence on the composition of modern communities. The sediment itself has already started to accumulate in the Late Glacial/Holocene transition, but the locality has fast overgrown by semi-open waterlogged forest with spruce and alder. Nevertheless succession towards forest habitats was partially blocked by strong travertine precipitation, forest snail species immigrated slowly and some light-demanding fen species could locally survive. The current communities were established once the woody plants, and especially reed, were reduced by medieval land use. The community itself is therefore not relict, but it harbours probable descendants of relict populations that survived in neighbouring small refugia throughout the Holocene. Our results strongly support the need for active conservation actions as mowing and extensive grazing.

Sampling at the nature reserve Močiar near Stankovany – a well preserved travertine fen with relict species of plants and molluscs. Photo by P. Hájková. 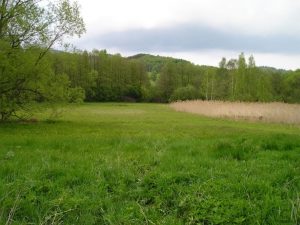 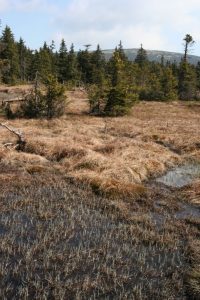 8/ Abrupt vegetation and environmental change since the MIS 2: A unique paleorecord from Slovakia (Central Europe)

Research on past abrupt climate change and linked biotic response is essential for understanding the future development of biota under changing climatic conditions, which, in turn, is necessary for adequate progress in ecosystem management and nature conservation. Our study presents the first comprehensive reconstruction of local and regional environment at the Western Carpathian/Pannonian Basin border, including a first chironomid-based paleoclimate reconstruction and δ18O and δ13C records from travertine. We illustrate that the most prominent abrupt change in the local environment occurred directly at the Marine Isotope Stage (MIS) 2/ 1 transition at 14,560 cal BP as a consequence of increased precipitation and an increase in reconstructed mean July temperature by ~2.2 °C. Our data suggest the presence of a steppe-tundra ecosystem with evidence for low amounts of temperate broadleaf trees during the MIS 2, indicating close proximity to their northern glacial refugium. Abrupt changes in local environment during the early Holocene were closely linked to travertine precipitation rate around thermal springs and thus indirectly to climate until the arrival of the Late Neolithics around 6400 cal BP. In May 2015, a 620 cm long profile (333-950 cm from the surface) was obtained from Santovka – Pramene Budzgov using a percussion drilling set. Megaspores of Selaginella selaginoides (upper left figure) and endocarps of Potamogeton pussilus agg. (upper right figure) were found in the glacial samples. Photo by A. Šolcová.

Biodiversity is currently undergoing major changes. To better understand the impact of these changes, we need to know how biodiversity was changing in the past. In this study, we used data on pollen diversity from sediments of peat bogs and fens across Central Europe. Based on their analysis we obtained models of plant diversity changes for since the end of the last ice age up to the present. We identified two main dynamics: 1) continuous increase in diversity since the end of the last Ice Age, which occurred in the lowlands and Carpathian Mountains, and 2) stagnation or slight decline in species diversity, followed by a steep increase, which we observed mainly in the Hercynian Mountains. Besides differences in environmental condition, contrasting histories of human settlement coincided with the two dynamics. Our results support the view that humans have been a major driver of past plant diversity changes. At the same time, differences in natural conditions between relatively small regions played an important role as well. 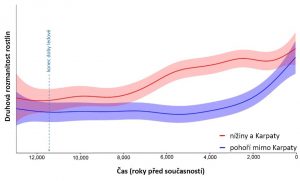