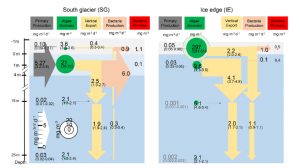 Schematic representation of the C cycle at SG (ice edge of Nordenskiöld tidewater glacier) and IE (edge of Adolfbukta and Billefjorden) study localities. All units are in milligram of C with median given in the circles and arrows and the minimum and maximum in brackets bellow. The grey area represents sea ice, the light blue area a brackish water layer, and the darker blue area deeper saline water layers.

From deep ocean trenches and the geographical poles to outer space, organisms can be found living in remarkably extreme conditions. This book provides a captivating account of these systems and their extraordinary inhabitants, extremophiles. 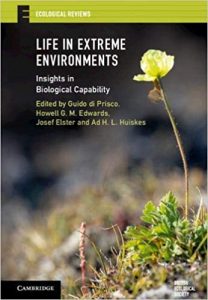 (In cooperation with Institute of Microbiology of the CAS, Centre Algatech.)

Soil microbes evolved complex metabolic strategies including photoprotective pigments to survive the environmental stress as a high UV irradiance. We examine how the composition and content of pigments in soil microbes in the Himalayas differ between major habitats spread across an elevation 4300–6000m including cold deserts, steppes, alpine and subnival vegetation. Scytonemin was the prominent pigment across all of the studied habitats. Rarely documented microbial pigments were detected, e.g. bacteriochlorophyll a. Alpine meadow soils had more diverse microbial and pigment assemblages than desert and steppe soils, or pioneer soils developing behind retreating glaciers. The best soil chemical predictors of pigment compositional variation were total nitrogen and cation contents. 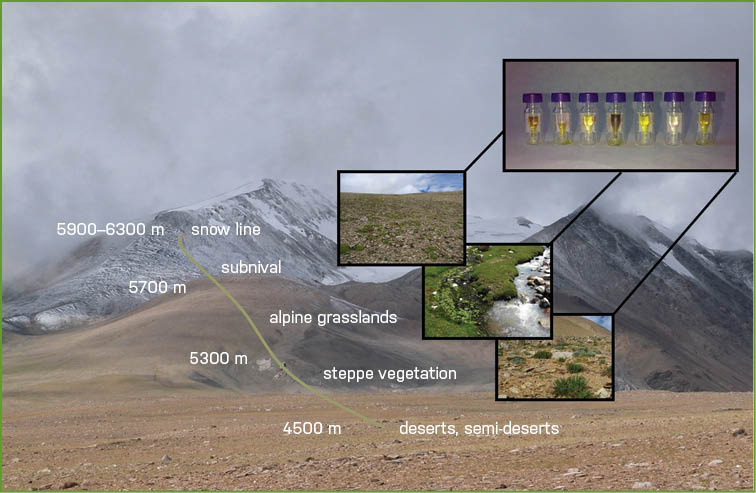 Study location in the area of Ladakh, India, Tibetan Plateau: Habitats and altitudes where the microbial photoprotective pigments from soils were extracted. Photo by K. Čapková

(In cooperation with Charles University in Prague and Fraunhofer Institute for Cell Therapy and Immunology.)

Melting snowfields in polar and alpine regions often exhibit a red and orange colouration caused by microalgae. The diversity of these organisms is still poorly understood. We applied a polyphasic approach using three molecular markers and light and electron microscopy to investigate spherical cysts sampled from alpine mountains in Europe, North America and South America as well as from both polar regions. Molecular analyses revealed the presence of a single independent lineage within the Chlamydomonadales. The genus Sanguina is described, with Sanguina nivaloides as its type. It is distinguishable from other red cysts forming alga by the number of cell wall layers, cell size, cell surface morphology and habitat preference. Sanguina nivaloides is a diverse species containing a total of 18 haplotypes according to nuclear ribosomal DNA internal transcribed spacer 2, with low nucleotide divergence (<= 3.5%). Based on molecular data we demonstrate that it has a cosmopolitan distribution with an absence of geographical structuring, indicating an effective dispersal strategy with the cysts being transported all around the globe, including trans-equatorially. Additionally, Sanguina aurantia is described, with small spherical orange cysts often clustered by means of mucilaginous sheaths, and causing orange blooms in snow in subarctic and Arctic regions.