Comparative Plant Succession among Terrestrial Biomes of the World

Despite a century of study by ecologists, recovery following disturbances (succession) is not fully understood. This book provides the first global synthesis that compares plant succession in all major terrestrial biomes and after all major terrestrial disturbances. It asks critical questions such as: Does succession follow general patterns across biomes and disturbance types? Do factors that control succession differ from biome to biome? If common drivers exist, what are they? Are they abiotic or biotic, or both?

The authors provide insights on broad, generalizable patterns that go beyond site-specific studies, and present discussions on factors such as varying temporal dynamics, latitudinal differences, human-caused versus natural disturbances, and the role of invasive alien species. This book is a must-read for researchers and students in ecology, plant ecology, restoration ecology, and conservation biology. It also provides a valuable framework to aid land managers attempting to manipulate successional recovery following increasingly intense and widespread human-made disturbances.

Karel Prach is Professor of Botany in the Faculty of Science, University of South Bohemia, and Senior Research Scientist at the Institute of Botany, Czech Academy of Science, Czech Republic. He has published extensively in the areas of succession, restoration, river floodplains, and ecology of alien plants. He is the current president of the Czech Botanical Society.

Lawrence R. Walker is Professor Emeritus in the School of Life Sciences, University of Nevada, Las Vegas. His research focuses on succession, disturbance ecology, and restoration. He taught ecology, conservation biology, and scientific writing for 30 years. He has published ten previous books, is an ISI Highly Cited Researcher, and held the Wilder Chair in Botany at the University of Hawaii (2009–2010). 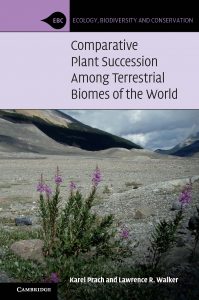