The project is funded under the Europian Union program Objective 3 for Support of the Cross-border Cooperation 2007-2013 between the Czech Republic and the Independent State of Saxony. The principal investigator is Technische Universität Dresden, Institut für Photogrammetrie und Fernerkund represented by prof. Dr. E. Csaplovics. GIS and Remote Sensing Laboratory of the Institute of Botany ASCR participates as a unique partner of the project. 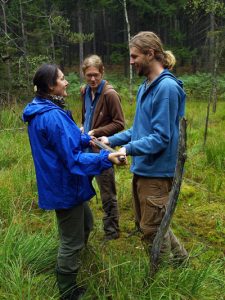 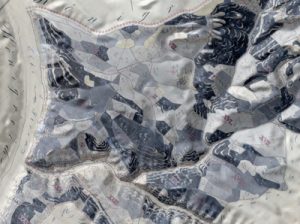 Map of forest stands from 1840 marking the age of stands by greyscale. Sampling a peat profile at Esenhübelmoor site; the investigator of the paleoecological part of the project, Přemysl Bobek, on the right.

At the national level, the cross-border region of the Bohemian Switzerland has been declared as a national park both in the Czech Republic and in Germany but at the same time it is a part of the landscape influenced by human activity for centuries. The objectives of both NP managements include the maintenance of forest stands including the conversion of historically changed stands to a close to nature state. The aim of this project is to provide a support for planning and realization of forest stands and landscape management in cross-border region. The sources of information used in the project include historical maps and text documents as well as paleoecological and recent botanical data.

Institute of Botany participates in cooperation with German collegues in gathering and analyzing the historical map data. Apart from that the Institute ensures the paleoecological and botanical part of the project. During the project an extensive map archive including more than 300 map sheets from 1780 to the present day has been gathered and digitized. Using these maps vector layers of forest stands have been created for two historical periods (1840 and 1920) enabling the evaluation of changes in species composition, age and spatial distribution of the stands. The paleoecological and botanical part of the project focused on investigation of the fire occurrence in the remote and recent past because we expect that fires play an important role in forest stands dynamics. The analysis of changes in charcoal accumulation and of their deposition in peat layers confirmed a significant frequency of fires during the entire Middle Ages. The analysis of the recent fire occurrence then proved a close link of fires to rock outcrops and plateaus. Anthracological analysis gave evidence of the continuous presence of forest stands with dominant Scots pine (Pinus sylvestris) throughout the Holocene. This is in contradiction to the opinion accepted so far and based on interpretation of palynological diagrams which presumes the occurrence of mixed oak forests in the period of climatic optimum and their subsequent substitution for beech stands during the subboreal. We suppose that the very frequency of the fires enabled the occurrence of the continuous pine stands.