The cooling leaf canopy protects forest organisms from extreme temperatures and has a significant influence on their adaptation to global warming. In an international research team, we studied the effect of climate warming under the forest canopy, thus also showing how warming in the forest differs from warming in open spaces. We measured the temperature in the forest interior at 100 sites and combined these measurements in a computer model with up to 80 years of data on the density of the forest canopy. This latter series comprised data taken from almost 3,000 repeated vegetation plots in European forests. If the tree canopy is denser, it buffers climate warming for the organisms living beneath it. If it becomes sparser, the plants living beneath it experience additional warming. Their previously cool, shady and generally more humid habitat is suddenly exposed to warmer and also drier conditions. Many species cannot adapt quickly enough, are displaced by warm-affinity species and may die out locally. Forest managers should therefore take account of the effects of forestry work on the climatic conditions in the forest interior and its potential impact on biodiversity. 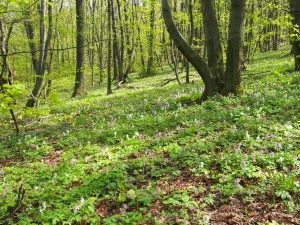 Plant diversity in European forests can be protected from climate warming by tree canopy.

2/ Rare plant species are increasingly missing in forests. It is due to nitrogen increase

In Europe’s deciduous forests, rare plant species are being displaced by more abundant ones. This development may be due to increased nitrogen deposition and, rather surprisingly, to the species occurrence range. In our international study based on an analysis of large database of repeated records in permanent plots in 68 sites with deciduous forests across Europe, we examined how the occurrences of a total of 1,162 plant species in European forests have changed in the past decades. Species with a small range, or area where they occur naturally, tend to decrease in time. These species are often adapted to relatively small amounts of nutrients in the soil. Our analysis pointed to a link between nitrogen emissions, produced mainly by the combustion of fossil fuels, and an increased risk of extinction of these species. On the contrary, plant species, which prefer nutrient-rich soils and occupy large range at the same time, have increased on a long term. Thus, while competitively weak and rare species are disappearing from forests, common species are increasingly frequent throughout Europe. Even more disturbing is the fact that many of the study sites are in protected areas, which tends to improve the general picture. The observed trend may be even more pronounced in commercially managed forests. 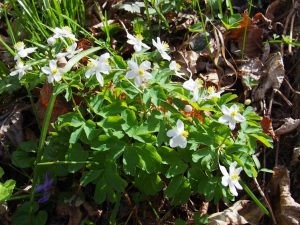 3/ Tropical forests can handle the heat, up to a point

Tropical forests can resist increasing temperatures without significantly losing their capacity to absorb excess carbon dioxide from the atmosphere. Forests release carbon dioxide into the atmosphere when the amount of carbon gained by tree growth is less than that lost through tree mortality and decay. Yet this positive finding is only possible if forests have time to adapt, they remain intact, and if global heating is strictly limited to avoid pushing global temperatures into conditions beyond the critical threshold. If we limit global average temperatures to a 2°C increase above pre-industrial levels this pushes nearly three-quarters of tropical forests above the heat threshold we identified. The study is the first to analyse long-term climate sensitivity based on direct observation of whole forests across the topics. The research suggests that over the long-term temperature has the greatest effect on forest carbon stocks by reducing growth, with drought killing trees the second key factor. To calculate changes in carbon storage required repeated measurements of tree stem diameter and height. This was connected with identifying nearly 10,000 tree species and over two million measurements of tree diameter, in 813 forests across 24 tropical countries. 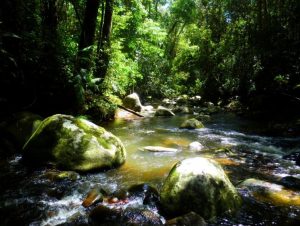 Our findings highlight how tree growth can be interactively determined by global-change drivers, and how these growth responses might be modulated by past forest management. By showing future growth changes for scenarios of environmental change, we stress the importance of considering multiple drivers, including past management, and their interactions, when predicting tree growth.

6/ Ecology and threats to Carex buekii in Central Europe

We found out that the ecological demands of Carex buekii are rather uniform across Central Europe. C. buekii exhibits fairly broad ecological range, it grows on open sunny places as well as in open alluvial forests. Within its broad optimum it forms dense, species-poor stands or monocoenoses. This sedge is due to its high competitive ability tolerable only for a limited number of accessoric species. Major threats of C. buekii are in habitat destruction, the quality of its stands is further affected by ruderalisation.