Systematics and taxonomy of vascular plants:

Systematics, taxonomy and ecology of lichens and fungi (lichenized and non-lichenized fungi):

1/ Global biosystematic study of evolution, diversity and hybridization in Stuckenia

Aquatic plants are often widespread, even across continents. They pose a challenge to species delimitation and taxonomy due to their reduced morphology and high phenotypic plasticity. We conducted a multidisciplinary study on the evolution, diversity, genetic variation, fertility and hybridization in Stuckenia, based on worldwide sampling. By applying multiple molecular markers, we were able to clarify species delimitations, describe intraspecific variation and its geographic structuring, and identify a large amount of intra- and interspecific hybrids. We showed that genetic distance is not always correlated with the biological differentiation of the species, the hybridization has been underestimated as a source of diversity, and that misidentifications and erroneous entries in sequence databases are frequent. Phenotypic variation inferred from cultivation experiments as well as assessments of fertility were integrated into an overall interpretation of the speciation patterns. Our study emphasizes that reliable taxonomic conclusions should take a complementary approach that combines data from morphology, distribution, cytology, reproductive biology and genetics. 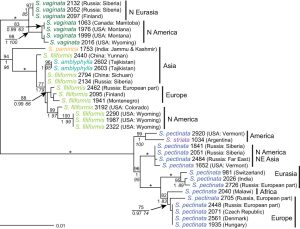 Our polyphasic study represents a new, comprehensive view on the molecular systematics and biogeography of the polyphyletic genus Codinaea and its relatives. We introduced a new generic concept and defined Codinaea as a monophyletic, polythetic genus that includes four morphotypes that contribute to its morphological complexity. Ancestral inference showed that evolution of some traits is correlated and that these traits previously used to delimit genera occur in species that were newly shown to be congeneric. We recognized five lineages of Codinaea-like fungi and introduced them as new genera. Dual DNA barcoding was successfully used to facilitate species-level identification. Codinaea and its segregates thrive on decaying plants, rarely occurring as endophytes or plant pathogens. In-depth analysis of environmental ITS sequences indicated that they are common in bulk soil and that most species are distributed in either the Holarctic realm or tropical geographic regions. The ancestral climatic zone was temperate, followed by transitions to the tropics. 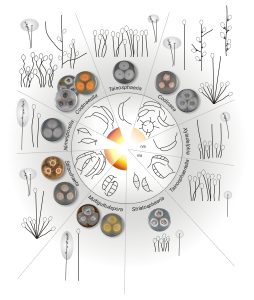 Morphotypes of Codinaea and similar genera with setulate conidia. Conidia and pigments formed in vitro are shown in the central (white) part of the circle. The arrangement of conidiophores with setae, if present, of each genus, along with the morphology of the conidiogenous cells and colony characters are shown in the outer (grey) part of the circle. Pigments diffusing in MLA and OA are shown by their respective colours and colony images; if no pigment is formed, the place at the centre is blank; n/a indicates that this information is not available.

Parallel evolution is common in nature and provides one of the most compelling examples of rapid adaptation. There are many studies addressing genomic basis of parallel evolution, but studies linking genomic and phenotypic parallelism are scarce. Toxic serpentine soils, characterized by naturally elevated levels of heavy metals and magnesium, provide an ideal system for rapid parallel adaptation. In our study, we showed independent adaptation in three serpentine populations of Arabidopsis arenosa using a cultivation experiment with serpentine and non-serpentine soils. We found pervasive phenotypic parallelism, for example in heavy metal ion uptake. Genomic parallelism at the gene level was significant, although relatively minor. In contrast, the parallelism at the level of biological functions was relatively high, this may indicate the selection of genes in similar functional pathways, which however lead to the same phenotype. 4/ Genetic insight into the adaptation of plants to toxic soils

We showed that genome doubling is an important source of genetic variants. We found that Arabidopsis arenosa repeatedly colonized and adapted to serpentines, toxic edaphic soils, which contain high levels of heavy metals and magnesium. We identified 61 genes under selection. Most of adaptive variants of these genes had a shared origin. However, we also identified potentially functional de novo mutations in polyploids suggesting their broad evolutionary flexibility. Can we predict evolution? This question is interesting to evolutionary biologists and also to researchers fighting antibiotics or pesticide resistance. We studied the degree of predictability on a model system of convergent adaptation, in which unrelated lineages independently adapt t similar environmental challenges. Thanks to the population genomics analysis of hundreds of plants we showed that the species adapt more similarly (via more comparable gene sets) if they are more related. The reason for this relationship is the ability of related lineages to share beneficial alleles, which they can repeatedly use in their adaptation. 6/ Disparity between morphology and genetics in Urtica dioica (Urticaceae)

The Urtica dioica agg. is a striking example of a polyploid complex, in which diploid taxa are often found in remote and partly relictual geographical ranges, in contrast to widely distributed weed tetraploids, which have an unknown evolutionary history and occur in a variety of synanthropic habitats. Our morphological studies have revealed that diploids form more-or-less separate clusters corresponding to widely accepted subspecies, while molecular evaluation did not reveal any clear structure. Moreover, tetraploids coalesced with diploids in both morphological and molecular analyses, except for plants from south-western Asia. The low genetic differentiation and disparity between morphological and molecular data might be driven by local adaptation of the diploid cytotype that is mirrored in specific phenotypes, only recent genetic diversification of the group and/or homoploid and heteroploid hybridization events. 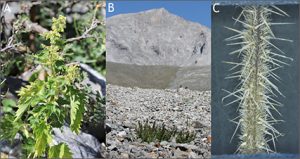 7/ Exploring generic boundaries in the Chaetosphaeriaceae

Based on a polyphasic approach we present a new, comprehensive view on the systematics and taxonomy of several genera of microscopic fungi, namely Catenularia, Dictyochaeta, Menisporopsis and Zanclospora. They are associated with significant variability of asexual morphological traits, which led to their broad delimitation. On the other hand, their sexual characters are uniform, leading to speculations whether the extensive morphological plasticity of asexual morphs could be correlated with their ecology. By integrating molecular, RNA structural, morphological and biogeographic data, it was possible to resolve and clarify the concepts of several genera that have been identified as polyphyletic. The dual DNA barcoding using ITS and tef1-α genes, together with tub2, facilitated accurate identification of members of these genera. The geographic distribution inferred from metabarcoding data using GlobalFungi database was consistent with known data and significantly increased our knowledge. Our studies are part of a long-term project leading to a rational classification of chaetosphaeriaceous genera based on phylogeny, and will help find answers regarding the value of morphological characters traditionally used to delimit microscopic fungi. Variability of colonies of the Dictyochaeta fuegiana complex on four nutrient media and sterile stems of Urtica dioica.

At the beginning of 2021, a new on-line atlas of lichens in the Czech Republic was launched. This is the first Czech lichen atlas, produced with the aim to make the data collected more transparent and better accessible. The portal Dalib.cz includes general characteristics of the Czech lichen biota, current taxonomic treatment and specific information on ecology, distribution and abundance of more than 1700 taxa. Almost 2000 pictures are available in the photo gallery and in individual species cards. For specialists, we developed a database of lichen secondary metabolites, which plays an important role in lichen identifications. General biodiversity (hot-spot) maps and individual species maps are generated from almost 141 000 current records in the DaLiBor database (Database of Lichens and Bryophytes in the Czech Republic). For every single record, a user can display details, including locality, date of collection, substrate and original source. The atlas should serve the public as well as specialists. We believe it will become a useful tool in practical nature conservation. Information on the website is available in Czech and English. 9/ A strikingly high species diversity on the Roof of the World: the genus Taraxacum in Ladakh

A detailed exploration of Ladakh, a mountain region situated in a rain shadow of the Great Himalaya Range, revealed a twice higher plant species diversity than previously known. The monograph of the model genus Taraxacum encompasses 120 species, of which 50 were discovered as new. This study revealed that the West Himalaya represents one of the world centres of the Taraxacum diversity, with a number of endemic and morphologically and evolutionarily isolated species. Taraxacum dilutissimum Kirschner & Štěpánek, one of the most widespread species in Ladakh, which was, however, scientifically unknown until recently.

Parallel evolution provides powerful natural experiments for studying repeatability of evolution and genomic basis of adaptation. Well-documented examples from plants are, however, still rare. Arabidopsis arenosa, a predominantly foothill species with scattered morphologically distinct alpine occurrences is a promising candidate. We sampled foothill and alpine populations in all regions known to harbor the alpine ecotype and used SNP genotyping to test for repeated alpine colonization. We combined field surveys and a common garden experiment to quantify phenotypic parallelism. Genetic clustering by region and coalescent simulations demonstrated parallel origin of alpine ecotype in four mountain regions. Alpine populations exhibited parallelism in height and floral traits. In contrast, leaf traits were distinctive only in certain region(s), reflecting a mixture of plasticity and genetically determined non-parallelism. We demonstrate varying degrees and causes of parallelism and non-parallelism across populations and traits within a plant species. Parallel divergence along a sharp elevation gradient makes A. arenosa a promising candidate for studying the genomic basis of adaptation. Despite a number of unique environmental adaptations, aquatic plants are considerably underrepresented in contemporary biosystematic studies. Moreover, the determination and taxonomic evaluation of aquatic plants is intricate due to the strong morphological reduction and a high degree of phenotypic plasticity. We reconstructed the phylogenetic relationships within the notoriously challenging aquatic genus Callitriche. We demonstrated that most of the recognized Callitriche species are genetically well defined, despite their similar morphologies. In at least three species we discovered and proved the occurrence of cryptic, previously unknown genetic lineages. Two species are probably allopolyploids, i.e. they arose through hybridization and subsequent genome duplication. We also detected four interspecific hybrids, two of which we described as new to science. Microscopic fungi of Chaetosphaeriales and Savoryellales are important components of ecosystems inhabiting decaying wood and leaves. We focused on traditionally broadly conceived Bactrodesmium and Chaetosphaeria. Research based on phylogenetic analyses, culture and morphological studies enabled to evaluate important taxonomic traits and placement of both genera. After 155 years since the description, we successfully collected B. abruptum, type species of the genus, which prompted a revision of the genus. We discovered that conidia secede rhexolytically, exhibiting multiple secession patterns. We stabilized the generic concept of Bactrodesmium in Savoryellales, while unrelated species were transferred to new genera Aphanodesmium, Gamsomyces and Kaseifertia. Although the morphology of sexual states of most Chaetosphaeria is relatively uniform, their asexual states show variability and evolutionary change. An exception to this morphological monotony is the group of species defined by the unique wall of the fruit body and the morphology of the needle-like spores. We resurrected the genus Paragaeumannomyces in Chaetosphaeriaceae, where these former Chaetosphaeria species were transferred. Coloured fruit bodies of representatives of Paragaeumannomyces and a vertical section of the wall exhibiting a unique three-layered structure.