We described fine‐scale differences between two common arbuscular mycorrhizal (AM) fungal species in nutrient supply to their host plant. Plant physiological parameters and expression patterns of its ammonium and phosphate transporters indicated that AM fungi can supply nutrients to the host plant in a generalist mode (with uniform efficiency across conditions) or in a specialist mode, tuned e.g. to low phosphorus availability. The study thus showed how seemingly similar AM fungi can act complementarily in fluctuating nutritional conditions. 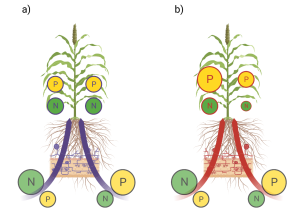 Schematic presentation of generalist and specialist arbuscular mycorrhizal fungi in nutrient supply to the host plant. The generalist (a) supplies both nutrients with similar efficiency across a gradient of nutritional conditions, while the specialist (b) efficiently supplies phosphorus but retains nitrogen at low availabilities.

The analysis provides a comprehensive overview on the benefits of different AMF species and taxonomic groups to plants and useful insights for their management and use. AMF had stronger positive effects on phosphorus nutrition than on plant growth and nitrogen nutrition, the effects on the growth of plants facing biotic and abiotic stresses were similarly positive. Diversisporales were the most beneficial AM group to plants without stress and Gigasporales to plants facing biotic stress. We developed a PCR approach specific to arbuscular mycorrhizal fungi (AMF), where we amplified approx. 2.5 kb of the ribosomal DNA (rDNA); the PCR products were then sequenced on the PacBio platform. Using our new method, we described complex communities of these important symbiotic fungi in environmental root and soil samples and provided their robust phylogenetic assignment. We consolidated information about AMF taxon distributions coming from three widely used barcoding regions.

The ribosome-encoding gene operon, with the target 2.5 kb fragment highlighted in green. Three regions (SSU, ITS and LSU) often used in arbuscular mycorrhizal fungal community studies are shown using their flanking primers. Locations of the regions and PCR primers are shown approximately to scale.

4/ Drought accentuates the role of mycorrhiza in phosphorus uptake.

In a greenhouse experiment Medicago truncatula plants – either grown with or without symbiosis with arbuscular mycorrhizal fungi – were exposed to a unique 15-step gradient of substrate moisture, ranging from plentitude of water to severe deficiency. The application of phosphorus isotopes to the substrate and tracing in plant biomass revealed that mycorrhizal fungi significantly increased the immediate uptake of phosphorus by the plants, particularly so in intermediate moisture or under drought. 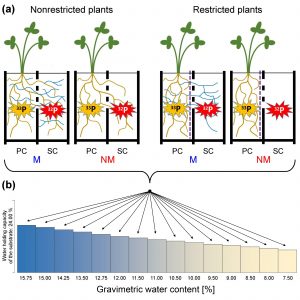 Scheme of an experiment exploring the role of mycorrhizal symbiosis in plant phosphorus uptake on a gradient of substrate moisture.

The identity and diversity of arbuscular mycorrhizal (AM) fungal symbionts strongly affect the functioning of mycorrhiza, but little is still known about the functional relevance of the individual taxa abundances within AM fungal communities. We demonstrated, in controlled experimental conditions with medic (Medicago truncatula), the importance of the abundances of certain AM fungal species for plant nutrient uptake and growth as well as carbon drain into the fungi. 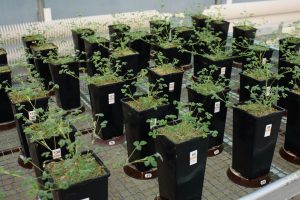 Establishment of alien trees outside their native range can be constrained by the absence of suitable fungal partners. Our metastudy shows that alien conifers rely upon association with co-introduced fungi from their native range, while alien eucalypts often form novel associations with fungi native to the region of introduction. Successful establishment of distinct groups of exotic trees can vary depending on their ability to associate with local fungi. 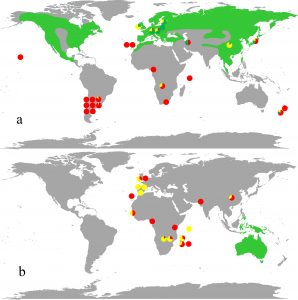 Global distribution of analysed ectomycorrhizal (EM) fungal communities (pie charts) associated with (a) alien conifers and (b) alien eucalypts. Colors of the pie charts indicate share of the three strategies that alien EM plants adapted to establish in new areas: interaction with co-introduced EM fungi from their native range (red), association with EM fungi which naturally occur in both native as well as introduced regions of the host plant (green), and establishment of novel associations with native EM fungal species (yellow). Native distribution ranges of Pinaceae and eucalypts are highlighted by green colour.

Ectomycorrhizal (EM) fungi are the key symbionts of numerous species of woody plants around the globe. Some have been co-introduced to a number of ecosystems along with their plant hosts. In this metastudy we investigated EM fungal communities associated with alien trees worldwide to assess the numbers and ecology of introduced EM fungi worldwide. Overall, we provide evidence that early succesional EM fungal species are more likely to naturalize in new areas on global scale.

Our results show that interactions of fungi from different ecological guilds (saprotrophic, mycorrhizal, endophytic) influence the flow of phosphorus in decaying plant litter and the transformation of the soil organic matter itself. Mineralization of plant litter promoted by saprobes was slowed down by mycorrhizal but not by endophytic fungi. The tested fungi did not affect the amount of produced humic substances but changed their chemical characteristics. Dark pigmented fungi increased the relative proportion of carboxylic moieties in the humic substances probably via the production and incorporation of melanins. Effect of fungal interactions on the  humification and phosphorus flow was not uniform over the tested species demonstrating importance of species identity in the transformation process. Fungal root endophytes can significantly contribute to litter transformation along with mycorrhizal and saprotrophic fungi.

It is assumed that seagrasses do not form mycorrhizae or any other specific root-fungus symbioses. The dominant Mediterranean seagrass Posidonia oceanica is an exception – recently, our team discovered that its roots host a unique symbiosis formed by a hitherto undescribed pleosporalean fungus, resembling the ubiquitous terrestrial root symbiosis with the so-called Dark Septate Endophytes. Thus, the aims of the present study were 1/ to investigate the distribution of the symbiosis, 2/ to describe the total fungal diversity in P. oceanica roots and 3/ to place taxonomically and describe the dominant pleosporalean symbiont. The symbiosis was present at all 32 investigated localities across the NW Mediterranean. At the same time, the total root fungal diversity was very low and dominated by the pleosporalean fungus. A multigene phylogenetic analysis confirmed that the fungus represents a new monotypic genus in the recently established Aigialaceae family and it was described as Posidoniomyces atricolor. The fungus is not known from any other hosts or environments and represents the only biotrophic representative in the Aigialaceae. 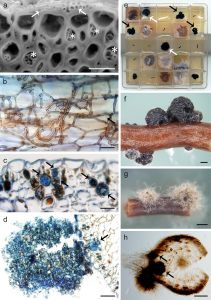 The study tested long-term infectivity of arbuscular mycorrhizal fungi (AMF) when introduced to a peat-based horticultural substrate and stored in five different temperature regimes (constant temperatures of −20, 5 or 20 °C) and two outdoor regimes simulating actual practice (shade and direct sunlight). Eight AMF inocula were tested, including 5 monocultures applied as 4% (v) of the substrate or their mixture in 1%, 4% and 8% (v) doses. Their infectivity was monitored for 56 weeks at 8-week intervals. In general, infectivity significantly decreased with time, but in three regimes including periods of cold (5 °C, shade and sunlight), cold stratification probably broke spore dormancy and led to temporal stimul­ation of AMF infectivity. Two AMF were found most resistant among the tested AMF. Except for storage at 5 °C, where a wider AMF spectrum maintained sufficient long-term viability, infectivity became very low after one year. Temperature fluctuations in direct sunlight were less negative than expected, whereas infectivity decline was surprisingly strong also in mild storage conditions (20 °C). Higher inoculum dose lengthened AMF infectivity. We ascribe the general decline of infectivity to unfavourable properties inherent to peat. 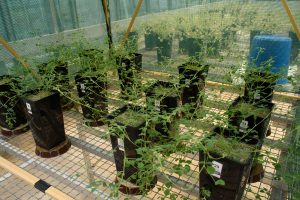 Greenhouse experiment focusing on the relationship of abiotic conditions, the composition of mycorrhizal fungal communities and the functioning of mycorrhizal symbiosis.