With globalization facilitating the movement of plants beyond their native range, preventing potentially harmful introductions requires knowledge of what drives the successful establishment and spread of alien plants. We examined global-scale relationships between naturalization and invasion success, soil seed bank properties (type and densities) and key species traits (seed mass, seed dormancy and life form) for 2350 species of angiosperms. Naturalization and invasiveness were strongly associated with the ability to form persistent seed banks but relatively weakly with seed bank densities and other traits. Our findings suggest that seed bank persistence is a trait that better captures the ability to become naturalized and invasive compared to seed traits more widely available in trait databases. Knowledge of seed persistence can contribute to our ability to predict global naturalization and invasiveness and to identify potentially invasive flowering plants before they are introduced. 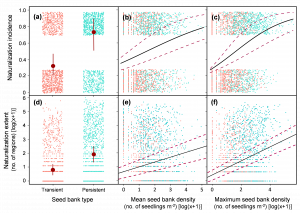 Invasive alien plants are known to reduce the diversity of recipient communities, but there is an ongoing debate on whether or not native dominant species have similar effects. To answer this question, we compared invasive dominant species of plant communities in central Europe with native species that dominate uninvaded communities in that region. The results showed that both native and invasive dominants can reduce the diversity of vegetation. In total, 17 dominants (nine native and eight invasive) significantly reduced community species richness, with Reynoutria ×bohemica, Calamagrostis epigejos, Phalaris arundinacea and Urtica dioica having the strongest effect. To conserve biodiversity, measures should be adopted to mitigate not only the impacts of invasive species but also those of native dominants, spreading in the current landscape; this would be best achieved by promoting traditional management and land-use. 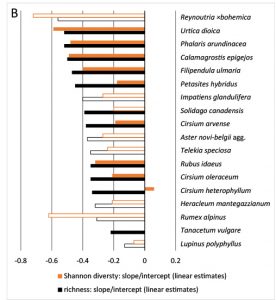 Comparison of the impact of native and invasive dominants on species diversity of plant communities. The longer the bar the stronger the negative impact.

Using the native and alien plant distribution data from 801 regions (including islands), we compared invasion levels (i.e. alien richness/total richness) in the Northern and Southern Hemispheres and across continental regions and islands around the globe. We show declining richness with increasing latitude, but the patterns differ among mainland and islands. Invasion levels decrease towards higher latitudes on islands but in continental regions, we found a unimodal pattern on each hemisphere. We identified significantly greater invasion levels on islands than in continental regions. Our findings identified latitudes with invasion hotspots where management is urgently needed, and latitudes with many areas of low invasions but high conservation potential where prevention of future invasions should be the priority. 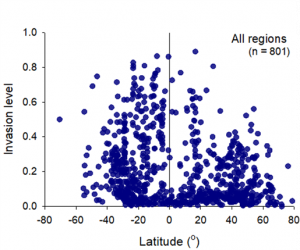 Comparative global patterns of plant invasion levels (alien richness/overall species richness) across latitudes and hemispheres when both islands and continental regions around the globe are combined.

Using a global seed bank database (GloSSBank) comprising data for 2,350 angiosperms, we examined whether soil seed bank type (transient vs. persistent) and density are determined by phylogenetic relatedness. We found a significant phylogenetic signal in seed bank type and density, providing evidence that the ability to form persistent seed banks is not randomly distributed across the phylogeny. The ability to persist in the soil was phylogenetically correlated with the production of dormant and smaller seeds, but seed mass and seed dormancy per se were poor predictors of seed persistence. Interestingly, habitat-related variables (mainly disturbance and canopy openness) but not climate significantly affect the ability of seed plants to form persistent seed banks. Our study is the first to show that phylogenetic relatedness plays an important role in explaining seed bank properties in angiosperms and how these properties relate to early life-history traits, climate and habitat-related variables. These findings represent important insights into plant behaviour in unpredictable environments and how seed plants might respond to global environmental changes.

5/ Socioeconomic factors in biological invasions: which plants we cultivate and how we chose them?

To analyse how human cultivation habits contribute to naturalization success, we combined global databases on economic uses and naturalization success of the world’s seed plants. We found that naturalization likelihood is 18 times higher for plants with economic value than for noneconomic plants. Naturalization success is highest for plants grown as animal food or for environmental uses (e.g. ornamentals) and increases with number of uses. Taxa from the Northern Hemisphere are over-represented among economic plants, and economic plants from Asia have the greatest naturalization success. Phylogenetic patterns in the naturalized flora partly result from phylogenetic patterns in the plants that humans choose to cultivate (van Kleunen et al. 2020). Which plants and animals are selected for cultivation and captivity, though, is partly determined by species charisma, defined as a set of characteristics, and the perception thereof, that affect people’s attitudes and behaviours toward a species. We show that such charisma can influence all stages of the invasion process, from introduction patterns to management actions by influencing public support or contributing to social conflicts (Jaric et al. 2020). 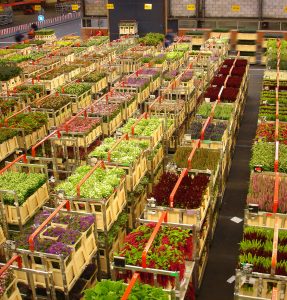 Horticultural trade is one of the most important drivers of plant invasions. Photo: Foto M. Vilà 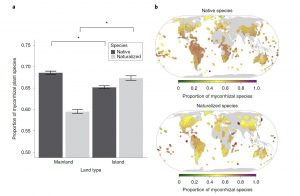 7/ Changes in species richness in the Anthropocene: from global inventories to theoretical concepts

The first global analysis of the effects of biogeographic factors, the physical environment and socioeconomy on the richness of naturalized and invasive alien plants revealed that socioeconomic factors were more important in explaining invasion than naturalization (1). The analysis was based on publicly released Global Naturalized Alien Flora (GloNAF) database, including 13,939 naturalized taxa and their distribution in 1,029 regions of the world, including 381 islands (2). To contribute to the global data on plant invasions we also developed global inventories of two functional groups, terrestrial alien ferns (3) and tall stature naturalized grasses (4). A separate analysis revealed that North and South America might face contrasting challenges in terms of potential threats to biodiversity posed by alien plant species, because of the different past and present dynamics of invasions and predictions of future development. In North America and South America additions of naturalized species to the native flora from other continents make up 6.9 and 1.4 %, respectively (5). As a theoretical concept we argue that it is important to distinguish species for which human-induced environmental changes are important indirect drivers of range expansion into new regions and that such species will become an essential feature for biodiversity management and science in the Anthropocene. We propose the term neonative for these taxa (6).

Dynamics over time of new species introductions to North and South America. (A, left panel) cumulative numbers of species, (B, right panel), numbers recorded as per year. Taken from Pyšek et al., Global Ecology and Biogeography 2019