Department of Experimental Phycology and Ecotoxicology

1/ The environmental fate of graphene oxide in aquatic environment—Complete mitigation of its acute toxicity to planktonic and benthic crustaceans by algae
Graphene oxide (GO) as the most studied hydrophilic graphene derivative can be deployed in a broad spectrum of environmental technologies opening the issue of its ecotoxicity. Nevertheless, the information about its behaviour in the complex aquatic environment is still not sufficient. Here, we studied the interaction of three differently oxidized GO systems with planktonic and benthic crustaceans. By standard toxicity tests, we observed the importance of feeding strategy as well as the surface oxidation of GO with respect to GO’s ecotoxicity. However, to gain a clearer insight into GO’s environmental fate, we introduced a pre-treatment with algae as the most common source of food for crustaceans. Such an adjustment mimicking the conditions in real aquatic ecosystems resulted in complete mitigation of acute toxicity of GOs to all organisms and, more importantly, to the eradication of oxidative stress caused by GOs. We argue that the pre-exposition of food is a crucial factor in GO’s overall environmental fate, even though this fact has been completely neglected in recent studies. These experiments proved that GO is not a hazardous material in complex aquatic environments because its acute toxicity can be successfully mitigated through the interaction with algae even at very high concentrations (25 mg/L). 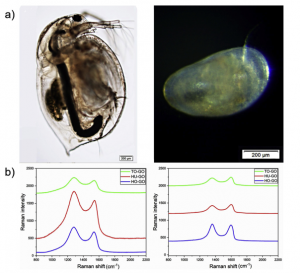 2/ Synergistic effects of trace concentrations of hydrogen peroxide used in a novel hydrodynamic cavitation device allows for selective removal of cyanobacteria
Here, we present an improved and verified rotating hydrodynamic cavitation device (RHCD) inspired by so-called cavitation heaters. The cavitation efficiency of the device is adjustable by rotation speed and flow rate and can be modified for selective removal of cyanobacteria from water with only temporal effect on algal growth or metabolic activity. Previous hydrodynamic cavitation devices have required several cycles to achieve cyanobacterial elimination (12-200 cycles, 5-200 min of treatment), while the RHCD is capable to remove 99% of cyanobacteria after a single cycle lasting 6 s. The device efficiency at cyanobacterial removal was synergistically enhanced through the addition of trace concentrations of hydrogen peroxide (45-100 mu M H2O2), levels 10-1000 times lower than those used in previous studies. The RHCD is also capable to increase temperature, an additional advantage for potential technological applications. We discuss the potential use of this device over a broad spectrum of technological processes, and especially regarding the addition of hydrogen peroxide, ozone, or ferrates, which could open new areas in advanced oxidation technologies. It could also be used as an alternative or as a complement to sonochemical, microwave-assisted or electrochemical methods in chemical engineering processes requiring treatment of large volumes of liquids.