The evolution of the genus Hordeum is associated with multiple horizontal transfers of genetic material from panicoid grasses. One of the transfers, and probably the oldest, can be characterized as the transfer of DNA from a representative of the genus Panicum to the genome of the ancestor of Hordeum’s section Stenostachys. The object of transfer was probably a set of fragments of chromosomes from Panicum, which were rearranged into one foreign fragment in the present genomes of wild barleys. The fragment contains several protein-coding genes, as well as ribosomal DNA and transposable elements. Panicoid protein-coding genes play a role in stress conditions, with at least one appearing to be potentially functional in present Hordeum species. Horizontal transfer could thus play a role in the adaptation of Hordeum to a changing environment. 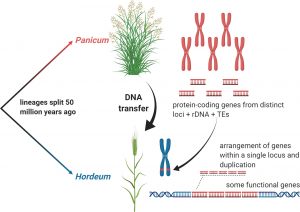 Hordeum (wild barley) species carry a chromosomal segment that was obtained from Panicum. Whereas the lineages of pooid and panicoid grasses split about 50 million years ago, the Panicum-like DNA fragment in Hordeum was obtained by horizontal gene transfer between 2.9 and 1.7 million years ago. The fragment contains protein-coding genes, ribosomal DNA genes (rDNA) and transposable elements (TEs). Before integration in Hordeum, different Panicum-like DNA fragments were rearranged into a single locus. At least one of the genes is potentially functional.

Using the Pleurothallidinae as a model orchid group, we attempted to assess the role of repetitive DNA replication, chromosomal variation and endoreplication type in the evolution of genome size. Indeed, orchids are the only plant group in which a unique type of endoreplication is known, where only a species-specific part of the genome is duplicated during cell differentiation. Our research has shown that partial endoreplication leads to preferential replication of functional parts of the genome (e.g. genes). In contrast, parts of the genome rich in repetitive sequences, i.e. those that do not encode genes and thus do not manifest themselves in the characteristics of organisms, do not replicate during endoreplication. Furthermore, we have shown that genome evolution at the species level proceeds at a double rate: while the coding part of the genome is more or less constant in closely related species, the part of DNA containing non-coding regions is constantly changing, and with it the overall size of the genome. This leads, among other things, to a huge variation in genome size in orchids. 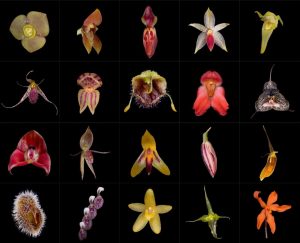 Images of flowers of representatives of the orchid group Pleurothaliidinae, ordered from the basalmost (bottom right) to the most derived (top left). The unusual morphological diversity is accompanied by a unique genomic feature, previously undiscovered in organisms other than orchids, which has a major impact on their evolution of genome size.

3/ The major satellite DNA families of the diploid Chenopodium album aggregate species: Arguments for and against the “library hypothesis”
Popis anglicky: Satellite DNA (satDNA) is one of the major fractions of the eukaryotic nuclear genome, however still little is known about its origin and temporal dynamics. The “library hypothesis” indicates that the rapid evolutionary changes experienced by satDNAs are mostly quantitative. Although this hypothesis has received some confirmation, a number of its aspects are still controversial. Here we address this hypothesis using next-generation sequencing based analysis of repeatome for diploid species representing the major evolutionary lineages of Chenopodium album aggregate. We identified eight satDNA families with highly variable distribution among these lineages. We found that new satDNA families may arise or existing ones may be eliminated even during short periods of evolution. Thus our data refute the “library hypothesis”, rather than confirming it, and in our opinion, it is more appropriate to speak about “the library of the mechanisms of origin”.

4/ Populations of Pilosella species in ruderal habitats in the city of Prague: consequences of the spread of P. aurantiaca and P. rothiana
Taxa of the genus Pilosella were documented on three ruderal sites of south and west Prague periphery. The study was aimed namely to recent hybridization, ploidy level/chromosome counts and mode of reproduction. Up to 18 Pilosella taxa were found co-occurring in single locality, most of them sterile or partially fertile hybrids, than with production of polyhaploid offspring. Nevertheless, it seems to be likely that those hybrid swarms will be stabilized via apomixis in course of time. Due to the very recent coexistence of taxa, which have not yet usually grown together, most of the hybrids observed have been undescribed. Although Pilosella fuscoatra is a hybrid between two apomictic parents, two clones with different colors and modes of reproduction (apomictic and sexual) were found at the locality of Hrnčíře.

5/ Analyses of hybrid viability across a hybrid zone between two Alnus species using microsatellites and cpDNA markers
Diploid Alnus glutinosa s. str. and autotetraploid A. rohlenae form a narrow hybrid zone in a study area in southern Serbia, which results in triploid hybrid formation. The tension zone model seems to offer the most adequate explanation of our observations, with selection against triploid hybrids and the spatial positioning of the hybrid zone. Despite selection against them, the triploid hybrids play an important role in the exchange of genes between the two species and therefore serve as a bridge for introgression. The presence of fertile triploids is essential for enriching the haplotype diversity between these species and for the development of new genetic lineages. 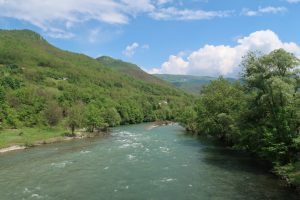 6/ The adaptive potential of genome doubling depends on local environmental conditions
While it has been repeatedly shown that polyploidization has direct effect on plant phenotype, the adaptive potential of ploidy-induced phenotypic novelty remained unclear. For our study, we selected a unique model system consisting of diploids and recently derived autotetraploids co-occurring in natural populations of the serpentine tolerant plant Knautia serpentinicola. Di- and tetraploid individuals were cultivated from seeds in a common garden experiment under experimental setting simulating two major environmental factors affecting plant life at the natural locality (presence / absence of serpentine substrate and interspecific competition). We have shown that tetraploids attained significantly higher values of both above- and below-ground biomass compared to their diploid progenitors. Interestingly, the tetraploid superiority in vegetative fitness indicators was most prominent when they were cultivated together with a competitor in nutrient-rich substrate. This suggests that provided there are sufficient nutrients, tetraploids can be more successful in tolerating interspecific competition than their diploid progenitors. Such fitness advantage could promote the establishment of newly originated polyploids by allowing them to colonize new microhabitats, which was indeed observed at the natural site. 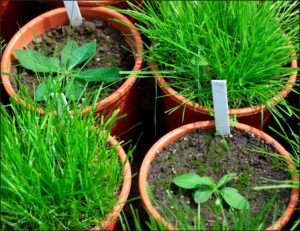 Experimental cultivation has shown that tetraploids of Knautia serpentinicola exhibit higher fitness than their diploid progenitors, especially when cultivated in nutrient-rich substrate with an interspecific competitor (grass Agrostis capillaris). Photo by M. Čertner

7/ Diversity in genome size and GC content shows adaptive potential in orchids and is closely linked to partial endoreplication, plant life-history traits and climatic conditions
(In cooperation with Universit­y of South Bohemia in České Budějo­vice.)

Genome size is thoroughly studied in seed plants because it exhibits huge variation spanning 2400-fold difference and is suspected to play an important role in their evolution. Although the GC content varies significantly less, it is thought to be important for the ability of plants to adapt to extreme climatic conditions. Cosmopolitan groups of plants, such as orchids, are therefore a suitable model system for identifying the evolutionary significance and adaptive role of genome size and GC content. Diversity in both traits possesses substantial adaptive potential in orchids and is closely linked to the ability to replicate DNA partially throughout the cell differentiation, to particular life-history traits, and climatic conditions. It means, for example, differential evolution of genome size for geophytes of temperate climatic zones or epiphytes of tropical regions. Thus, obvious trends in trait evolution to different optima under different conditions are characteristic for orchids. Namely GC content exhibits unparalleled diversity and orchids set new limits for angiosperms as well as for eucaryotes. The immense role of partial endoreplication, a unique feature of orchids across living organisms, was detected in shaping the diversity of genome size, and GC content. 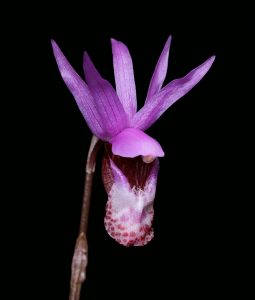 8/ Polyploid evolution: The ultimate way to grasp the nettle
Polyploidy is one of the major forces of plant evolution and widespread mixed-ploidy species offer an opportunity to evaluate its significance. We therefore selected the cosmopolitan species Urtica dioica (stinging nettle), examined its cytogeography and pattern of absolute genome size, and assessed correlations with bioclimatic and ecogeographic data (latitude, longitude, elevation). We evaluated variation in ploidy level using an extensive dataset of 7012 samples from 1317 populations covering most of the species’ distribution area. The widespread tetraploid cytotype (87%) was strongly prevalent over diploids (13%). A subsequent analysis of absolute genome size proved a uniform Cx-value of core U. dioica (except for U. d. subsp. cypria) whereas other closely related species, namely U. bianorii, U. kioviensis and U. simensis, differed significantly. We detected a positive correlation between relative genome size and longitude and latitude in the complete dataset of European populations and a positive correlation between relative genome size and longitude in a reduced dataset of di­ploid accessions (the complete dataset of diploids excluding U. d. subsp. kurdistanica). In addition, our data indicate an affinity of most diploids to natural and near-natural habitats and that the tetraploid cytotype and a small part of diploids (population from the Po river basin in northern Italy) tend to inhabit synanthropic sites. To sum up, the pattern of ploidy variation revealed by our study is in many aspects unique to the stinging nettle, being most likely first of all driven by the greater ecological plasticity and invasiveness of the tetraploid cytotype. 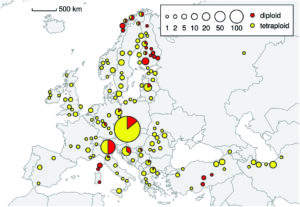 Distribution of two dominant cytotypes of stinging nettle (Urtica dioica) in Europe and West Asia. Map of all samples based on flow cytometric analyses of 1305 populations. The size of the circles reflects the number of populations. From Rejlová et al. (2019)