A study led by ecologists from the University of Konstanz, Mialy Razanajatovo and Mark van Kleunen, with participation of two researchers from the Institute of Botany, The Czech Academy of Sciences, Petr Pyšek and Jan Pergl, shows that plants able to produce seeds without mates or pollinators are more likely to naturalize outside their native range, and thus can spread more easily around the world. The results of the international collaboration project, that further included researchers from German Centre for Integrative Biodiversity Research (iDiv), University of Göttingen, University of Vienna and University of Durham were published in the prestigious journal Nature Communications on 31 October 2016.

More than 13,000 plant species have, due to humans, spread outside their original geographic ranges, where they now grow and reproduce in the wild. As some of these naturalized alien species threaten native biodiversity, there is large interest in finding plant traits that drive the naturalization of alien species. So far, only few traits universally associated with naturalization success have been detected. For this project the researchers extracted quantitative data from so-called breeding-system experiments on the ability of plants to self-fertilize. Data for a total of 1,752 plant species were combined with data on naturalized plant species from the Global Naturalized Alien Flora database (GloNAF), compiled by the authors of the present paper in 2011–2015 (see van Kleunen et al., Nature 525:100–103, 2015).

Most plants are hermaphroditic, which means that they have both male and female reproductive organs, allowing for self-fertilization. Selfing ability is more prevalent among short-lived plants that reproduce only once in their life time than among long-lived plants, and might also positively affect the size of a species’ native range. Both longevity and native range size might also affect naturalization success. This makes it difficult to determine the actual influence the selfing ability has on the probability that a species would naturalize. 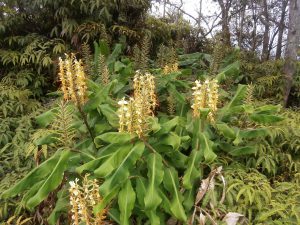 Hedychium gardnerianum is an example of a plant with a high selfing ability naturalized in many regions. Photo by M. Hejda